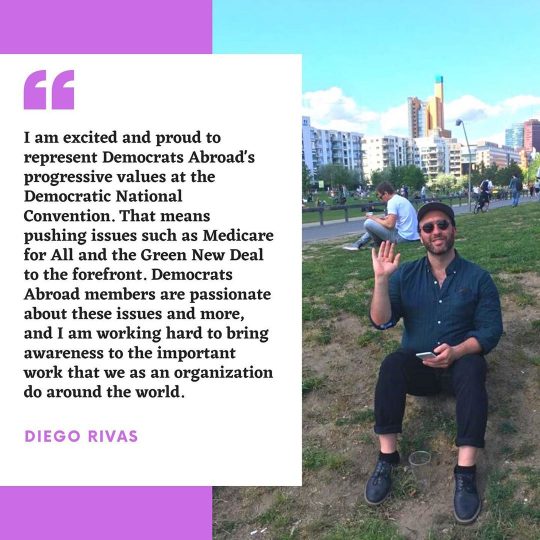 Diego Rivas is the chair of the Berlin chapter of Democrats Abroad and a Bernie Sanders delegate to the 2020 Democratic National Convention.

As you surely have heard, the 2020 Democratic National Convention will be held digitally across America, and of course in our case: around the globe.

On July 27th, the last round of amendments to the 2020 Democratic Platform were made.

Drafting the platform was a multi-step process, starting with: The Biden-Sanders Unity Task Force Policy Recommendations

The task force consisted of members appointed by both of the campaigns.These recommendations focused on six major policy areas: healthcare, the economy, climate change, criminal justice, education, and immigration. In addition to the recommendations, the DNC Platform Drafting Committee then held three committee hearings, which all together culminated in the first draft of the platform.

On  July 27th, the DNC Platform Committee met to adopt amendments to the platform draft. This is one of the three standing committees. For each of the three standing committees, Democrats Abroad has one representative. Our DNC Platform Standing Committee member Travis from DA UK did make an amendment to remove the filing requirement for US citizens living abroad who qualify for the foreign tax exemption. The amendment was not adopted.

Voting to adopt the platform and nominate our presidential candidate will take place digitally between August 3rd and August 15th. The platform is expected to be adopted, there is some push from the progressive wing however to have the platform take another look at including Medicare for All.

Also coming up will be the rules committee. Democrats Abroad is working on supporting Larry Cohen’s resolution to make this year’s rules permanent.

As a delegation, we had storytelling workshops and are currently reaching out to the press to get out the word on how great Democrats Abroad is. I am reaching out to my home region (since one of the Biden delegates, Onélica, comes from the same hometown!), so we are doing a joint press release. I will be reaching out to the media in the coming days here in Berlin and Germany. I will also be submitting a delegate video to the convention with the hope of getting it profiled, and with its content being how great and progressive DA is.

Last week, Bernie Sanders addressed his delegates. It was great to hear him speak (although it was 2 AM in the morning here 😉 ).

I hope you have found this update useful and that you have a better idea of how our Democratic process works.

One Thought on “2020 Convention Update: A Convention Across the Globe”