The Democratic Party Committee Abroad (DPCA) held its annual conference of the EMEA Region in Berlin from the 6th to 8th of November 2009.  Eighty leaders of Democrats Abroad from some 25 countries participated in an inspiring program in the capital city of Germany during the historic weekend of the 20th Anniversary of the Fall of the Wall.

Democrats Abroad Germany and its Berlin Chapter had successfully bid for this conference and assisted in making it one of the best attended to date.  The professional and historic Venue of the Rathaus Schöneberg with its prestigious Kennedy Room gave the meeting a meaningful venue.
Well planned workshops and discussions helped prepare our regional leadership to make sure that our organization is geared up for to impliment the continuing changes we need in the upcoming mid-term elections in 2010. 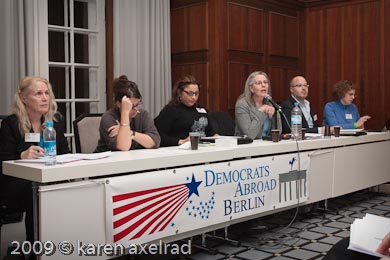 On Saturday between sessions, participants climbed the stairs to the Bell Tower of the Rathaus and gathered under a replica of The Liberty Bell which was presented to Berlin as a gift from the United States during the 1950s.  Their efforts were rewarded with beautiful weather and a wonderful view overlooking Berlin while members of the Berlin Chapter read The Bill of Rights.  The visit to the tower concluded with everyone joining in as guitarist John Shreve sang a moving rendition of “This Land is Your Land”.

Eight of the nine chapters of Democrats Abroad Germany were represented at the meeting. 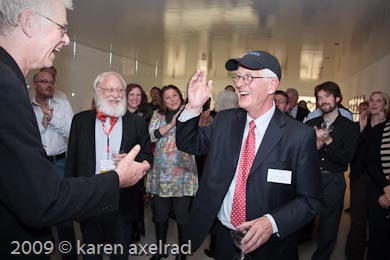 The volunteers of the Berlin Chapter of Democrats Abroad Germany excelled in making sure that all the guests felt welcome and were well taken care of.  A special opening reception hosted by of Democrats Abroad Germany at the elegant Museum The Kennedys in the middle of the city with special guest speaker Karsten Voigt, from the German Foreign Office set the positive and cooperative tone for the weekend.

Many participants enjoyed Saturday evening’s gala dinner which was served at Restaurant Lenzig not far from the meeting venue. where special guest Mike Michner honoured guests with a compelling speech.