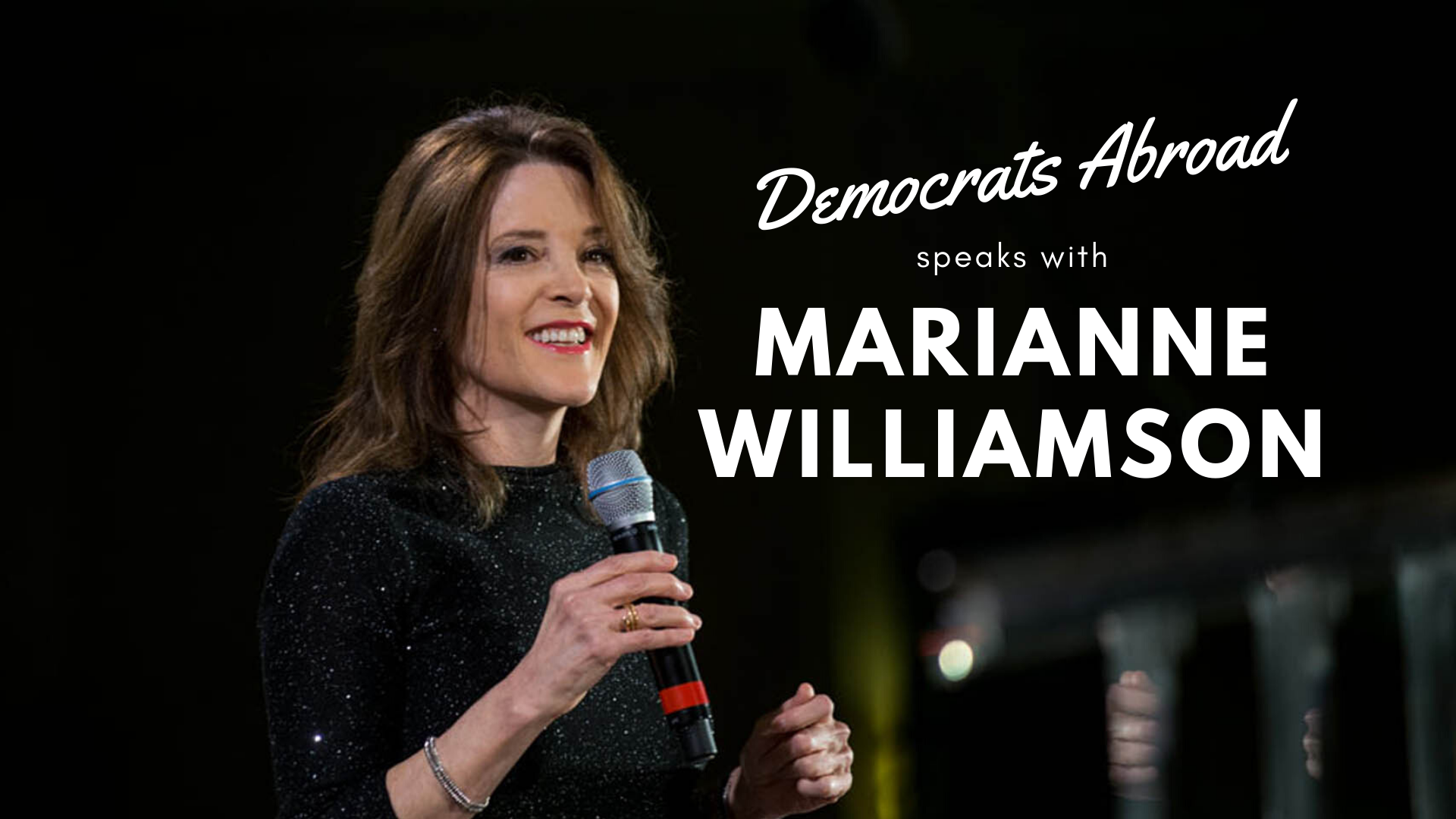 Join Democrats Abroad as we talk with Marianne Williamson about her Presidential campaign and hear from her about issues important to Americans abroad.
When: Wednesday, December 4, 2019, at 9am Eastern Time (15:00 Central European Time)
Where: Zoom call (This is an online call, so you will need an internet connection in order to attend.)
RSVP to receive the video conference link: https://www.democratsabroad.org/democrats_abroad_speaks_with_marianne_williamson?recruiter_id=1464

Marianne Williamson is an author and activist who is running for President because she believes that the United States needs a new kind of leadership. Franklin D. Roosevelt had said “The Presidency is not merely an administrative office. That’s the least of it….It is pre-eminently a place of moral leadership.” Williamson aims to become that moral leader at a time we need it most. Some Dems Abroad members may have already met Marainne at the global meeting in DC, but for those who haven’t, here is some more information her and the campaign.
Williamson is the author of 13 books, with four #1 NYT best sellers. Williamson co-founded Project Angel Food, a non-profit that has delivered more than 12 million meals to ill and dying homebound patients since 1989. The group was created to help people suffering from malnutrition and the many other ravages of HIV/AIDS. They have since expanded their service to any person battling a critical illness. She is the co-founder of The Peace Alliance and supports the creation of a US Department of Peace. Williamson says, “My campaign provides the American people with the option of choosing another way — not just a better version of the same old, same old politics, but a genuine pattern of disruption that allows for breakthroughs and possibilities that will not otherwise occur.”
As President Marianne Williamson will create a US Department of Children and Youth (USDCY) to more adequately address the chronic trauma of millions of American children. The USDCY will coordinate information and solutions for families and children with wraparound services, anti-trauma, restorative justice, education, conflict resolution, emotional health services, and medical care.
Williamson recognizes that throughout America there are extraordinarily successful peace-building efforts, whose efficacy would be exponentially increased through a higher level of coordination and government support. The U.S. Department of Peace would include dealing with gun violence as its first priority. The Department of Peace will also work domestically to expand economic opportunities for women, expanded educational opportunities for children, reduction of violence against women, and the amelioration of unnecessary human suffering wherever possible. Internationally, it would augment the diplomatic work of the Department of State, the Department of Defense, and add significant support to the U.S. Institute of Peace.
Williamson has advocated for reparations for slavery since the 1990’s and was the first candidate in this presidential primary season to make it a pillar of her campaign. Williamson has proposed a “Reparations Commission” to guide the way, dispersing $200-500 billion over ten years to promote education, infrastructure, and projects dedicated to African American communities.