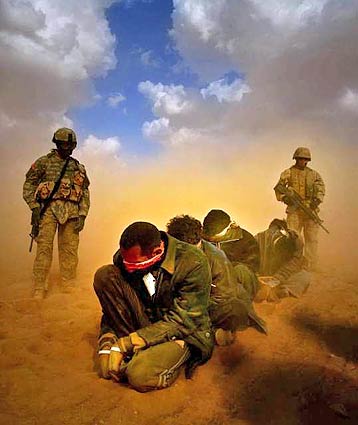 "Taxi to the Dark Side" is a documentary that traces the homicide of an Afghan taxi driver at the Bagram Air Force Base from Afghanistan to Guantanamo right up to the corridors of power in Washington. U.S. soldiers are interviewed throughout the documentary expressing regret over the torture and inhumane treatment of the detainees, nevertheless asserting that it was the top commanders who issued the practice of torture.
Filming took place in Afghanistan, Guantanamo, and Washington, DC and
includes interviews with Lawrence Wilkerson, Rear Admiral (ret.) John Hutson, Former Legal Counsel Alberto Gonzales, former FBI agent Jack Cloonan, John Yoo, as well as victims of the administration's torture policy. Therefore the movie emphasizes that the present US-American government has opted for torture and cruel, inhuman or degrading interrogation from the beginning.

The producer and director of the film Alex Gibney is called by some as a "muckraker" http://www.goodmagazine.com/section/Portraits/muckraker

Afterwards Michael Ratner , President of the Center for Constitutional Rights (CCR), will comment on present  legal circumstances of "enemy detainees " in the U.S. and answer questions..

Five years ago, one month after the first detainees arrived at Guantánamo, CCR filed the first challenge to the Bush administration's attempt to create an offshore penal colony outside the rule of law.  As we turn the corner to 2007, Guantánamo is beyond repair. CCR won in the Supreme Court in 2004, continue to represent the detainees in more than 200 cases in the courts, and co-ordinate a legal network comprised of hundreds of attorneys.

Michael Ratner is President of the Center for Constitutional Rights, a non-profit human rights litigation organization in New York City. He was co-counsel in representing the Guantanamo detainees in the Supreme Court where a major victory was won in June 2004. He and his office have sued two of the private contractors in Iraq alleging their employees were involved in the abuses and torture at Abu Gharib. He filed a criminal complaint in the courts of Germany against Secretary of Defense Rumsfeld and other U.S. officials seeking the initiation of criminal prosecutions against them for the Abu Ghraib abuse and torture.  The Center for Constitutional Rights is deeply involved in defending civil liberties in the United States, post 9/11. This has included a challenge to the Patriot Act and a lawsuit on behalf of post 9/11 immigration detainees in the U.S. and representation of Maher Arar, a Canadian citizen, sent, or rendered, to Syria where he was tortured.