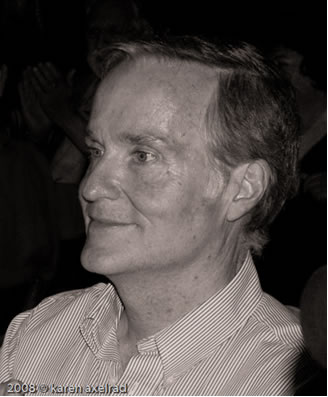 Democrats Abroad Berlin has lost a dear friend and dedicated member of our chapter.

David Lester Vierling passed away peacefully in the evening on Tuesday, September 15th after a prolonged struggle with cancer.  His loving children, Anna and Thomas were with him.

A native of California, David held degrees in History and Comparative Literature from Stanford (BA) and Cornell (MA) Universities.  He came to Germany in 1980 as a Doctoral candidate and became a respected screenplay translator, teacher of Literature and Writing at Berlin’s Freie Universität and JFK School, as well as member of the Berlin Yacht Club.  Major themes explored during his career were, "Individual vs. Society" and "Appearance vs. Reality".  A former singer and guitarist in a rock band, David applied his vast knowledge of Literature, Music, Art, and Film, often combining these aspects to convey US popular culture, especially regarding the Vietnam War.

Many of us were pleased to welcome David at our June 2nd meeting after he had returned from Maryland where he had undergone experimental treatment at the American Institute of Health.  Sadly, the treatment was unsuccessful in arresting the development of the cancer and soon thereafter, he was admitted to a hospice facility in Berlin-Steglitz.

David has been an inspiration to many of us especially throughout this past year.  He faced his illness with great courage and as his health declined, he accepted his increasing limitations with grace and dignity.  Although his disease rendered him physically paralyzed, he astonished those near him by remaining positive, mentally active, politically informed and conversant till his untimely death.

After having recently learned of his illness, David was a powerful presence who joyfully celebrated the November 4th election of President Barack Obama with us here in Berlin.

While he was concerned with many issues facing our nation and our party his own medical situation brought David immediately closer to the pressing need for health care reform.  He was hopeful for the future and was heartened by the changes that have been initiated by the present administration.  David’s strength, resolve and dedication will continue to inspire us.

A memorial service will take place here in Berlin in the next 3 or 4 weeks.  We will keep you informed as those details become known.

We offer our sincerest condolences to David’s family as they begin their walk without him.  While they may not have his physical presence, they will forever carry his love and his gracious legacy into the future.