At the annual general meeting of the Berlin chapter of Democrats Abroad Germany  on January 11th , 2011 at the Restaurant Max and Moritz in Berlin Kreuzberg, Nancy Green was reelected  as Berlin  chapter chair for the next two years.  In a very close race she defeated her competitor Donald Black by a close margin 54,2 % / 45.8%.

After the election Donald Black presented the victor Nancy Green with a bouquet of flowers.  The democratic process within Democrats Abroad is based on solidarity and unity. Nancy Green will lead the Berlin Democrats through the next presidential election cycle for the re-election of President Barack Obama. 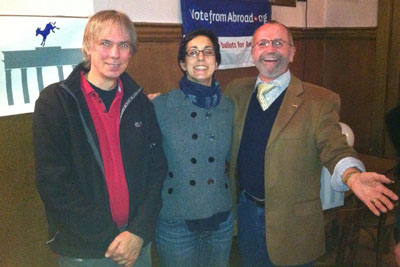 It was a good turnout for the election.
The chapter selected Jessica Andrade, secretary of the chapter,  to be the provisional chair for the election. She was assisted by the official monitors David Knudson and John *** .