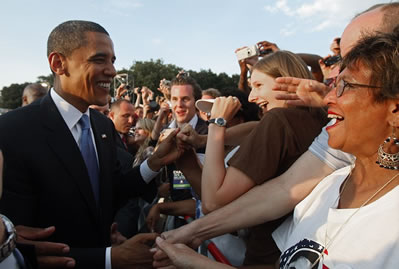 Barack Obamas visit to Berlin on July 24th was like a Tsunami.  It moved us forward in a tremendous surge and  left us with an energy to keep us in motion for successful change.
Democrats Abroad Berlin put in all the effort they could to assist the Obama Team in putting up the most successful event that we have ever participated in.  Not only did he speak to more people than ever before, he totally dominated the media with his message of change.  He was truly a citizen of the world and the best ambassador of american values we have seen in generations.  It was an honor for us to have him in Berlin as a guest and we are sure, that this will not be his last visit.
We and the rest of the world will all soon be very proud to have him as the next president of the United States.