Tuna contaminated with Fukushima radiation discovered off US coast

Bluefin tuna spawned off Japan’s coast have been found to have carried radioactive contamination leaked from Fukushima to waters 6,000 miles (9,650km) away off California in the US. 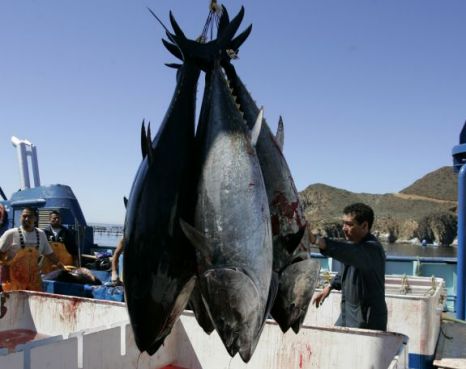 Japan consumes about 80 per cent of the world’s Atlantic and Pacific Bluefin tuna (Picture: AP)

Scientists, who insisted the fish remain safe to eat, said it was the first time a huge migrating fish had been shown to carry radioactivity over such a large distance.

‘We were frankly kind of startled,’ Nicholas Fisher, one of the researchers said after publishing their findings online in the Proceedings of the National Academy of Sciences.

They found levels of radioactive caesium ten times higher than measured in tuna off California in the previous year.

While smaller fish and plankton have been found with elevated levels of radiation, larger fish such as Pacific Bluefin tuna – which can grow up to 10ft (3m) and weigh more than 1,000 pounds (450kg) – are expected to metabolise radioactive substances.

Scientists also analysed Yellowfin tuna in the eastern Pacific and Bluefin which had migrated to southern California before the nuclear crisis to rule out the possibility of radiation being carried by ocean currents, but no trace was discovered apart from that left over by nuclear weapons testing in the 1960s.

Ken Buesseler of the Woods Hole Oceanographic Institution said the results were ‘unequivocal – Fukushima was the source’.

Professor Fisher said the Bluefin tuna would have absorbed radiation through the water and via contaminated prey such as krill and squid.

‘That’s a big ocean,’ he said. ‘To swim across it and still retain these radionuclides is pretty amazing.’

This summer researchers plan to repeat their study with a larger sample group and extend their research to sea turtles, sharks and seabirds.